Weirdly Dark, Ambient Soundtrack to 2017 Film is the Perfect Spring Companion for A Year in an English Garden: Flicker+Pulse

Primarily Known for Her Work in We Fell to Earth, and Recent Solo Project, as well as Collaborations with Earthlings?, Queens of the Stone Age and Mark Lanegan, this is the Second Collaboration in a Trilogy with Director Brian McClave Including the Forthcoming Acclaimed Clay+Bone featuring Will Self and a 3D Short Film, The Papa Westray Great Auk Made in Conjunction with the British Natural History Museum

The evocative ambient score is due to be released in time for Spring, as the film’s full title A Year in an English Garden: Flicker+Pulse perfectly reflects the new beginnings and transformations in Spring, including the cycle of life and death. Dark, hypnotizing and sometimes playful, the score was not composed to picture. Musical suggestions were approved, then developed into ideas and the picture was edited to the final compositions. A soundtrack as unique as Wendy Rae Fowler, herself.

Primarily known for her work in We Fell to Earth, as a solo artist, and with bands like Earthlings?, Queens of the Stone Age and Mark Lanegan, this is Fowler’s first score to be released. It is part of a trilogy with Director Brian McClave that includes another documentary Clay+Bone (narrated by best-selling author Will Self) set for release later this year.

In 2021, Wendy Rae Fowler released her debut solo album Warped: Resurrection on her Ghost Rhythm Records on 2xLP and digital. Dave Grohl summarized the record as, “Hypnotic and atmospheric, Wendy Rae Fowler’s Warped:Resurrection paints a David Lynch-ian soundscape that swells from a whisper to a roar, each track rolling dark and light together into a dangerously seductive album, leaving you bewitched and wanting more.”

The late Mark Lanegan said of Fowler, “Like a contemporary soundtrack to a Bela Tarr cityscape where southern goth, Ennio Morricone and Siouxsie Sioux melt together, the shadow atmospherics of Wendy Rae Fowler is brooding and visceral, dark and dreamlike. Highly recommended for insomniacs et al.” 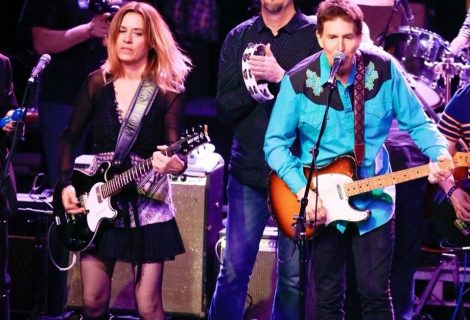